Land of the midnight sun

I'm very much looking forward to taking part in the EDEN Conference in Oslo between June 12-15 this year. Last year I was unable to attend EDEN, due to pressure of work. This time I made sure I would have the time, by blocking out my diary for the conference week. I'm glad I did. I have been given the honour of being invited to chair the keynote sessions of Sugata Mitra and Sir Ken Robinson, and to moderate a debate between them both on the future of education. Sir Ken will be speaking live via satellite from the USA and Sugata will be present at the conference in Norway.

Alongside a great team of people, I will also be live blogging and tweeting throughout the event, and may even get some time to interview some of the delegates, speakers and organisers. Watch this space to read my own blog posts, as well as those of the rest of the EDEN blogging team over the next few weeks in the lead up to the conference, and then during the event itself.

I'm looking forward to seeing Norway again, and my first visit to Oslo, especially during the time when the nights are at their lightest. It's always difficult to sleep in the land of the midnight sun, where in mid summer the night skies are so bright and the sun never seems to fully set. But I intend to spend as much time as possible awake anyway, so I can enjoy the conference and spend as much time learning as much as I can. If you are going to EDEN this year, I hope we bump into each other. If not, stay in touch through the EDEN conference website, to watch the live streaming, and watch this space for news, views and reports.

Welcome to the Joy of Learning Conference blog. This blog is attributed to the EDEN 2013 Annual Conference and will be live throughout the conference. The blogger team consists of the great Steve Wheeler and the Young Scholar Blogger Squad, a group of enthusiastic young researchers who answered our call and will provide you a unique insight to the conference: Helen Hughes, David Sik, Lindsay Noel and as our photoblogger: Danuta Starikova. 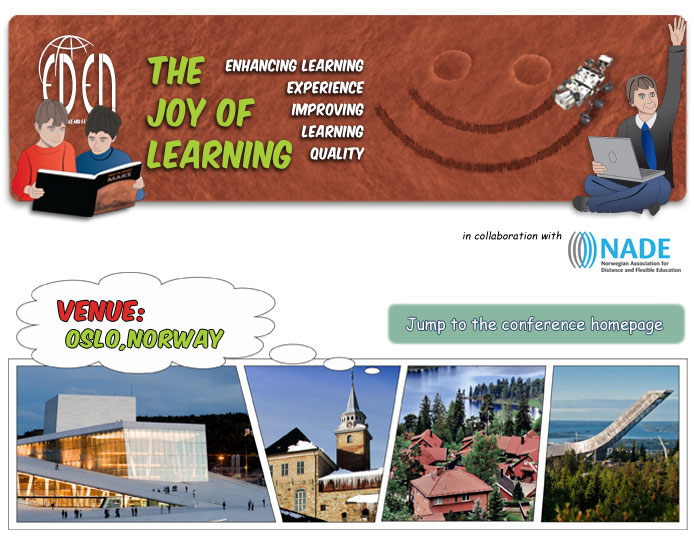