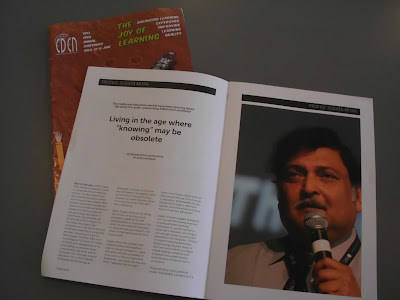 'It's quite fashionable to say that the education system is broken - it's not broken, it's wonderfully constructed. It's just that we don't need it any more. It's outdated.'

These are the radical thoughts of Professor Sugata Mitra, the doyen of innovative education and a figure of some controversy. Sugata Mitra recently won a $1 million TED prize to develop his ideas around his 'School in the Cloud' and building on his notion of minimally invasive education. Mitra told me the phrase 'minimally invasive education' came from his interest in medical procedures, where keyhole surgery was the least invasive method for surgical intervention, and caused the least amount of trauma.

What if, he argued, we could do the same thing with education? Well, many people now know the answer to that question, because he has disseminated his findings, and whatever the detractions and arguments against the Hole in the Wall projects, it has to be said that this bold experiment has some striking outcomes. Not least, claims Mitra, children when left to their own devices (in this case a computer screen and touch pad mouse in a wall) and when they are in small groups, children will teach themselves an extraordinary amount of new skills and knowledge. Whatever your views on this shade of auto-didacticism - and there have been some vociferous criticisms, do watch the video interview I did with him at this year's EDEN conference, and then make your own mind up. Is he a charlatan, or a genius?